A dialogue with development practitioners on Ceres2030’s eight evidence syntheses aimed at identifying the best interventions and entry points to achieve SDG2 and a deep dive in the economic costing model to estimate how much it will cost.

What works to end hunger? Finding and synthesizing global evidence 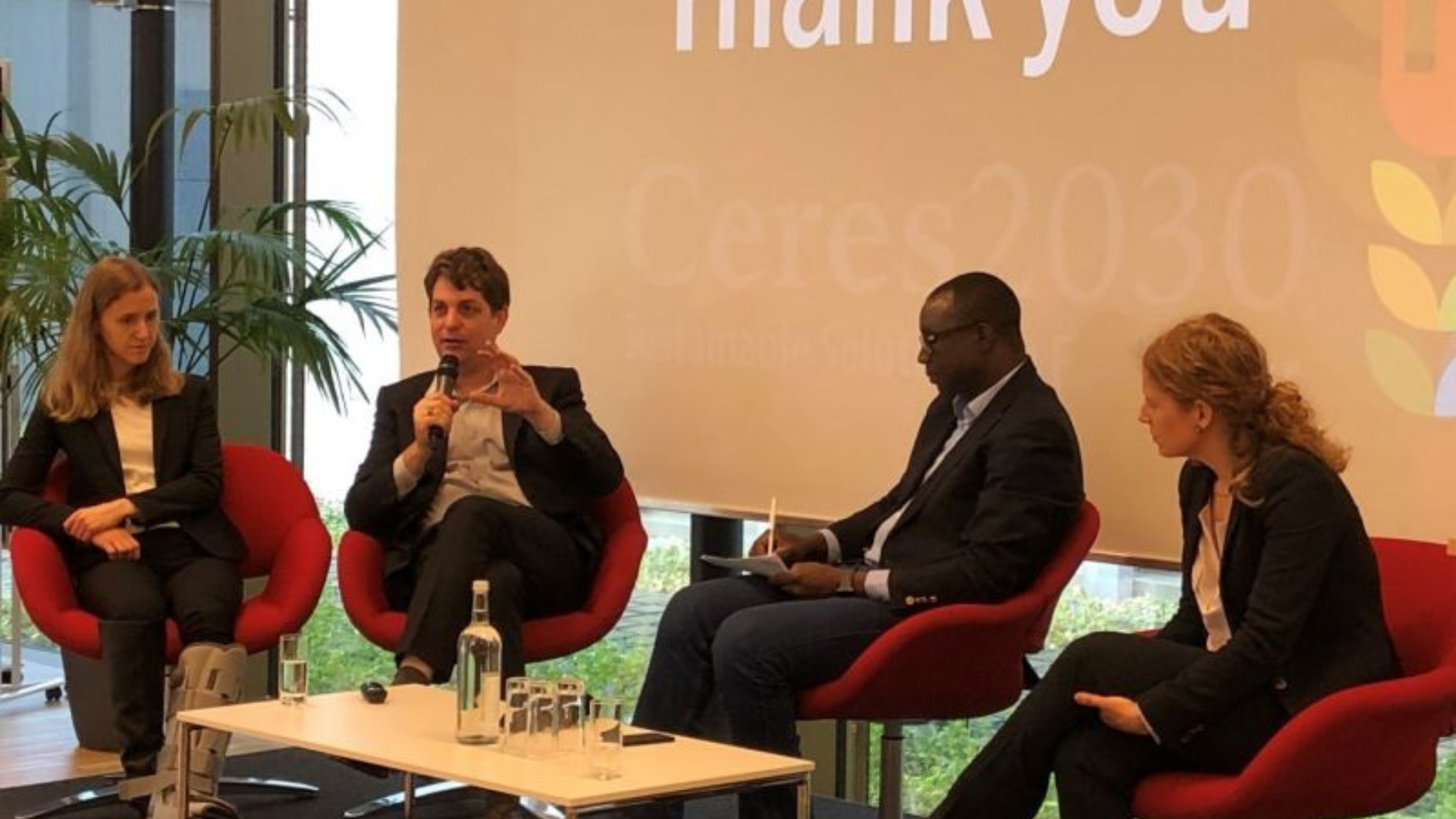 On 26 February 2020 at GIZ’s offices in Bonn, the Ceres2030 team engaged in one of many dialogues planned with donor and implementing agencies on their research methodology and results. Ceres20320 is a partnership between International Institute for Sustainable Development (IISD), International Food Policy Research Institute (IFPRI), and Cornell University supported by Global Donor Platform members, Germany's Federal Ministry for Economic Cooperation and Development (BMZ) and the Bill & Melinda Gates Foundation. Dialogue with the donor agencies and development practitioners is key for the success of the project, whose aim is to provide tangible guidance for donors on where and how they should make their investments to achieve the goal of zero hunger by 2030. The project, introduced by Carin Smaller of IISD, combines a synthesis of the existing evidence base for eight questions in agriculture, identified with the guidance of an advisory board composed of 18 experts in sustainable food systems from 17 global organizations, with an economic cost modelling. The focus on evidence to support achieving SDG indicators 2.1, 2.3 and 2.4 is due to an identified dearth of evidence for these factors. In addition, SDG2 is seen by many as a means to achieve other SDGs, for example, those for climate action in SDG13 and for reducing inequalities in SDG10. The machine-learning techniques applied by Ceres2030 have allowed the review of a huge data set of evidence – 100,000 articles on agriculture produced over the last 10 years – “one of the largest reviews of agriculture evidence base to ever take place,” according to Smaller.

A global value chain of knowledge

The processing of existing literature is the first step in the “global value chain of knowledge,” a term coined by the project team, which is followed by a systematic review by the eight authors teams, a diverse and multi-disciplinary research network of 77 experts. Marie Parent of IFPRI detailed how the authors’ resulting evidence is quantified into information to be inputted into the cost modelling, by considering, for example, the direct effects of the action or behaviour, the possible variation in the affected population and the expenditure parameters. Further, for the scrutiny of the practitioners present David Laborde, also of IFPRI, expanded on how this evidence is linked with other data sources at the macro, meso and micro levels and scaled up to the global level through a process of assessment of the local context and clustering of countries. Other factors will interplay with the project’s final cost estimates, for example, the expected level of ODA and policy environment as well as when the investments will be made. “The longer you wait the less choice you will have for successful interventions and the higher the cost will be” noted Laborde. The final results of Ceres 2030 will be presented at the BMZ’s SDG2 Momentum event on 8 June 2020 and subsequently published in a special collection with the Nature Research Journals, which means the articles will be subject to the highest standards of peer-review. Giving a taste of the initial results, Carin Smaller highlighted the role of SMEs, specifically traders, processors and cooperatives, have in providing an increasingly wide set of complementary services to smallholder farmers, filling gaps which can be systematically linked to increased productivity and profitability. The message for donors here is not to crowd out these successful actors but to invest in the enabling environment. In addressing the question of policy incentives leading farmers to adopt environmentally sustainable practices, the research showed how essential economic incentives are to first allow the farmers to transition to sustainable practices and second to maintain new sustainable practices because of increased profitability. There is more to hear from Ceres2030 in the coming months. Beyond BMZ’s SDG2 Momentum event in June, the Ceres2030 Team has forthcoming plans: further scenario development for the cost modelling, a broad stakeholder dialogue to disseminate the learnings of their findings and future collaboration with related research initiatives.

Latest in SDG 2 and Zero Hunger