Significant steps have been taken to prioritize land tenure security not only in global policy frameworks but also in implementation plans. A side event at CFS45, organised by the Global Donor Working Group on Land together with other key players, took stock of progress.

Flyer of the session

About the Land Portal 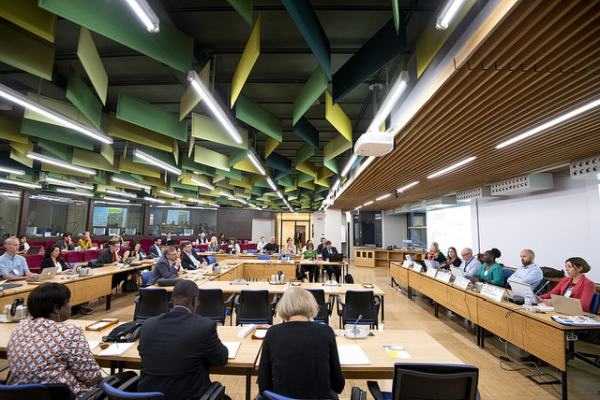 Since the approval of the Voluntary Guidelines on the Responsible Governance of Tenure (VGGT) in 2012, several countries have integrated its principles into national law and decision-making processes. Land also gained further traction in 2015, when three land indicators – 1.4.2, 5.a.1, 5.a.2 – were included in the Agenda 2030, signaling that tenure security was inseparable from several of the overarching SDGs. While the vision was clear, questions on how to monitor progress towards the goals and evaluate the impact of related interventions remained unanswered. Responding to this call, a range of monitoring and data generation initiatives and tools were created. However, the challenge remains to coordinate the various initiatives, to ensure land tenure security is in fact improved at the end of the day, and in an inclusive and effective way.

This topic was discussed at a side event during the 45th Committee on World Food Security (CFS) in Rome. The session was organized by the Global Donor Working Group on Land together with the International Land Coalition (ILC), the International Fund for Agricultural Development (IFAD), the Millennium Challenge Corporation (MCC), the Global Land Indicators Initiative (ILC), the Land Portal and other partners from the land development community.

Speakers and participants exchanged views on the growing ecosystem of data and on how to further improve collaboration among actors, make people-centred data and monitoring tools more accessible, and further democratize information on VGGTs and SDGs.

GLII – Everlyne Nairesiae talked about the role of the GLII in addressing the call for developing globally comparable indicators on land. 15 GLII indicators, designed in extensive consultations with multiple actors, had been taken up by all of the initiatives present in the side event. Many of these indicators go beyond the datasets found in formal cadaster systems; they cover aspects of the VGGTs, human rights, corruption and others (see link at the bottom).

ILC’s Dashboard – Ward Anseeuw referred to ILC’s Dashboard as an initiative aimed at democratizing the monitoring of land interventions by including local communities in the definition of indicators and in data collection. ILC identified 270 land initiatives within their membership and organized 12 consultations to agree on a monitoring system, resulting in 30 widely recognized indicators for land tenure security (see link at the bottom).

Prindex – This initiative to assess people’s perception of land tenure security just launched a report with results from the first 15 countries involved in the measurement exercise. Speaker Anna Locke reported that the average tenure insecurity is 25%, which represents ca. 41 million adults across these 15 countries. In countries such as Zambia, the results demonstrate that even with documentation, people do not feel safe in their lands (33% of interviewees held documents, but only 27% felt safe). Gender gaps were also assessed. Women are more worried about losing tenure in case of spouse death and divorce, and this fear can keep women trapped in an oppressive situation.

Land Portal – Speaking on behalf of the Land Portal, Laura Meggiolaro argued that the lack of synergy and coordination amongst key stakeholders, such as governments, civil society, academia and donors, means that important providers of information are mostly working within their own sector and keeping valuable data on projects, initiatives unnoticed to other potential beneficiaries. The Land Portal tries to address this gap and catalyse increased access to information, but recognizing that data is only valuable if delivered to the right people in the right context.

Guidelines for Impact Evaluation – MCC’s representative Jennifer Lisher highlighted the importance of impact evaluation (beyond monitoring) and the lack of consistent data to allow for this. She introduced the recently published Guidelines for Impact Evaluation of Land Tenure and Governance Interventions, which is the result of a collaborative work of many land tenure practitioners and specialists. The overall objective of this publication was to inform and strengthen the design and implementation of future land tenure and governance initiatives and achieve related impacts on poverty, food security, gender equality, environmental sustainability and security.

It’s not about data, but who owns it and how it is used

As with many development challenges, solutions for a more inclusive and effective governance of land tenure do not only lie in the amount of data, but in many other areas. Participants and speakers agreed that: