Capitalizing and Disseminating Impact of VGGT Implementation in Africa

Capitalizing and Disseminating Impact of VGGT Implementation in Africa

Experiences in implementing the Voluntary Guidelines on the Responsible Governance of Tenure of Land, Fisheries and Forests in the Context of National Food Security (VGGTs) from several African countries were shared during a side event held by the Food and Agriculture Organization (FAO) of the United Nations at the 2019 Conference on Land Policy in Africa (CLPA). 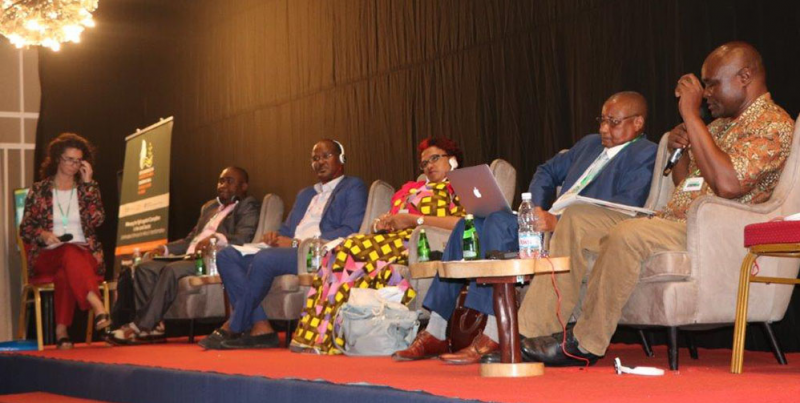 FAO, a member of the Global Donor Platform’s Working Group on Land, moderated the session that displayed how state and non-state actors from various African countries, including Sierra Leone, Namibia, and Kenya were able to take advantage of the VGGTs. The VGGTs provide a framework and stepwise approach for improving the governance of land tenure.

Jobo Samba, from the Sierra Leone Ministry of Lands, Country Planning, and the Environment, talked about the successes his ministry has had in using FAO’s Open Tenure software, an open source mapping package that allows people to map land at a community level and have their customary tenure rights recognized using mobile devices and crowdsourcing techniques. Open Tenure’s beauty and strength, said Samba, lays in its simplicity and ease of use, which enables people to use the program quickly to increase the legal empowerment of the community, which has been instrumental in driving the VGGTs forward. Sierra Leone has also made strides in developing legislation that supports secure land tenure, in addition to having recently implemented a multi-stakeholder, community participatory approach to officially mark land boundaries with Ministry surveyors. This community-involved process has been helpful in informing the government of Sierra Leone on how to shape legislation that includes aspects of customary land tenure and women’s land rights.

Namibia’s Parliament benefited from a VGGT training conducted by the FAO to develop its capacity to provide policy, legal, and institutional support to the implementation of the VGGTs, said Sophia Swartz, a member of Namibia’s Parliament. Swartz said that during the training, members of Parliament learned more about the linkages between effective land governance and sustainable development, and the need to budget for land governance. The new Parliament will have a meeting with various stakeholders involved in land to see how the VGGTs can be formalized and incorporated into legislation. Besides the challenge of convincing colleagues to increase the budget for land related issues, the work of Namibia’s Parliament in pushing for effective land governance is constant, as new election cycles bring in new members of Parliament that need to understand the importance of land.

The purpose of Kenya’s 2016 Community Land Act, said Dr. Herbert Musoga, Director of Land Use Planning at the National Lands Commission of Kenya, was to provide for the recognition, protection, and registration of community land rights; formalize its management and administration; and provide a role for county governments in relation to unregistered community land. The implementation of the VGGTs to assist the Commission has benefited from a host of development partners and non-state actors. The actual implementation has been a multi-faceted approach done at the county level. The process in working with the community provided boundary demarcation data that was previously undocumented such as boundaries, ecological aspects of the community, and other realities that can only be known by working with the support of the community.

The question and answer session stimulated engaging discussions that were continued in the hallways after the side event was finished, demonstrating the ability of the event to increase awareness on the application of VGGTs to improve the governance of land tenure and share unique perspectives on lessons and experiences in the implementation of VGGTs.