Climate variability and extremes, in addition to conflict, are among the key drivers behind the recent uptick in global hunger and one of the leading causes of severe food crises. The cumulative effect of changes in climate is undermining all dimensions of food security – food availability, access, utilization and stability. To dive deeper into the topic, GIZ’s Agriculture Policy and Food Security project in Bonn organized an expert talk on 9 October 2019 on Food Security in times of climate change – Where do we stand and what shall we do? with Dr Shenggen Fan from the International Food Policy Research Center (IFPRI) and Prof. Matin Qaim from the University of Göttingen, Germany. 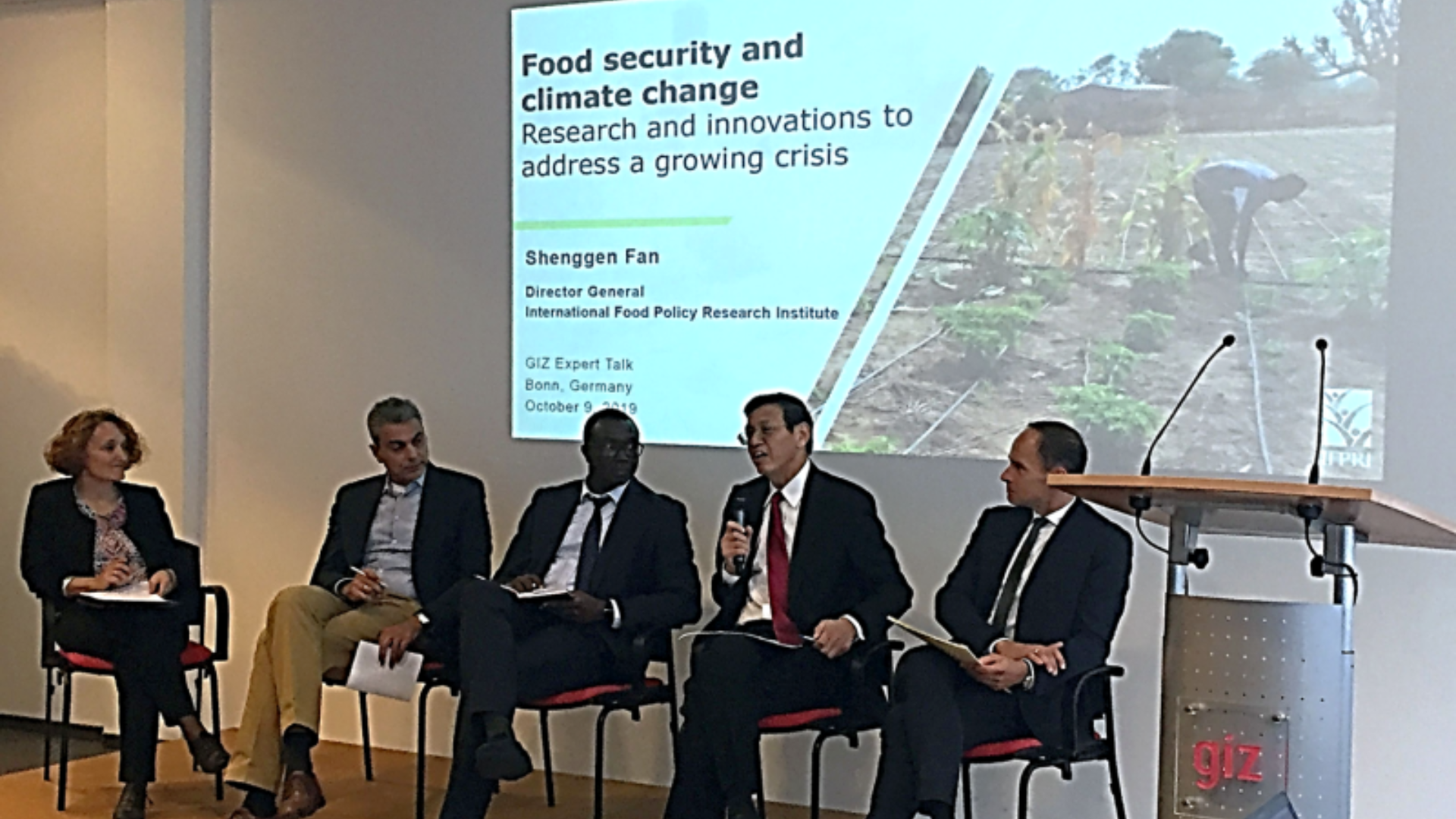 In his welcoming address, Marc Nolting, GIZ’s Head of Section for Fundamentals for a Rural Future and Nutrition, highlighted the increasing number of food insecurity globally and malnutrion in all forms. He emphasized the need for an agricultural research that assesses the relevance of development cooperation agencies’ approaches to the current challenges and the paradigm shift that might be required. In addition, he called for further research collaborations between stakeholders from various institutions, as seen between GIZ and IFPRI, to tackle the challenges ahead.

Climate change and its burden to food security

To give an idea of where we stand, Fan presented a figure from IFPRI IMPACT simulations, which estimate that in 2050 climate change will set an additional population of 46 million in Sub-Sahara Africa and 14.1 Million in Asia at risk of hunger. Climate change may also reduce the global nutrient availability relative to expected technology and market gains by 2050 and countries with high levels of nutrient deficiency will be disproportionally affected. Additionally, the simulations reveal that climate change will also generate a range of disease and food safety impacts that will negatively affect health and nutrition.

These estimations clearly signal climate change’s disruptive effect on the progress towards many Sustainable Development Goals (SDGs). To address this issue, Fan emphasized the crucial roles of agricultural research and the importance of investing in it. He went on to talk about innovative approaches, such as digital data collection and climate-smart agriculture (CSA) adoption for woman farmers, which generate big data and enhance agricultural productivity, resilience, and greenhouse gas emissions mitigation effort. In his closing remarks, he also reiterated Nolting’s appeal for further multi-stakeholder and cross-country collaborations with a strong emphasis on the topic of nutrition.

Qaim’s second point endorses climate-smart agriculture practices that are highly productive while having a low environmental footprint at the same time. He gave an example of how organic agriculture, although often mentioned as a potential game changer, is still contributing to agriculture’s greenhouse gas (GHG) emissions in the form of land use change. This point triggered audience’s concern on putting forward an agricultural production in synergy with the environment – instead of destroying it – where organic agriculture plays a key role in.

In the following point, Qaim highlighted the importance of efficient food and agricultural trade for food security and against the background of climate change. It is also his attempt to debunk misconception that local sourcing is more climate-friendly than long-distance trading produce. He affirmed that trade contributes to efficient and sustainable use of the scarce natural resources that are not equally distributed across countries and regions.

Finally, Qaim’s last two points call for diversity in food systems and a shift in the consumption styles. To diversify food systems successfully, he recommended that the topic be highlighted in policy discussions, research projects, and markets strategy planning. For the latter point, he appealed for actions from both producers and consumers that will reduce the quantity of food loss and waste along the supply chain.