The 2019 Conference on Land Policy in Africa’s plenary session, “Securing Land Tenure for Women and Other Marginalized Groups”, recognized that sustainable development in Africa cannot be achieved without ensuring the context based implementation of secure land tenure for women, pastoralists, fisher folks, hunter-gathers, and others.

Keynote speaker, Josefa Leonel Correia Sacko, Commissioner for the Department of Rural Economy and Agriculture Women of the African Union Commission, stated that women and other marginalized groups are not homogenous, a theme that was expanded upon by the panel of distinguished speakers. Sacko highlighted that women and girls face multiple forms of exclusion, be it because of age, marital status, ethnicity, or religion, and so safeguarding their livelihoods, including secure land tenure is paramount.

However, women are routinely denied rights to land, have less land than men, and have land of lesser quality than men due to a number of challenges, including the fact that poor land administration and complex administration systems contribute to a lack of transparency, often leading to corruption. This corruption further obstructs women’s access to land, increases obstacles to reach markets, and in extreme cases, can lead to evictions.

Sacko further elaborated that increasing women’s agency is key to securing land governance because many women are not fully engaged in decisions on land. This is because women are often not considered to be the public face of a family and land administration, which, at its core, is a public activity. Although there are existing problems that women face regarding secure land tenure, including a scarcity of land tenure data for women, the problems represent opportunities for governments, civil society organizations, academia, communities, and individuals to focus their transformative energies in a collective effort to secure land tenure rights for women and other marginalized groups. 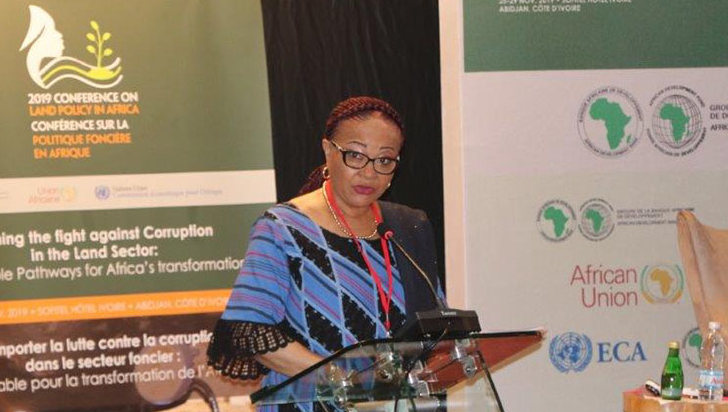 Ellen Olounfe Pratt, Commissioner of Land Use and Management, Liberian Land Authority, outlined some of the systemic challenges confronting women and other groups in securing land tenure, particularly the gap in implementing soft laws and legislation on the ground. Some laws now include women in the land management making bodies, and women are able to own land privately, jointly, or collectively, regardless of marital status. However, traction in laws have not translated to traction in implementation to the complex realities and problems that women face across the continent, including financial limitations that prohibit the enforcement of rights, which puts vulnerable women at a higher risk of incurring informal costs.

In order to counter this vulnerability, Pratt stated the priority action for securing land rights for women and these groups is to increase the literacy of these groups and go beyond merely handing the people a copy of the law. The adaption of policies to specific local contexts that take into account the diversity of women and other marginalized groups and the development of tools to close the implementation gap can help drive good land governance.

Emmanuel Sulle, a researcher at the Institute for Poverty, Land and Agrarian Studies, echoed the notion that the implementation of land tenure policies remains the largest challenge due to the complexity of women’s, pastoralists, and fisher folks’ livelihoods. Despite this challenge, Sulle stated that progress has been achieved in various areas, such as: the increase of research by African scholars that has produced data to inform policies, legislation, and tools; the reflection of land tenure “soft laws”, such as the VGGTs, in some countries’ constitutions and legislations; the inclusion of different actors’ narratives in land tenure discussions, such as youth; and the use of innovative approaches to capture dynamic livelihoods. This progress can help lead to greater progress by leading to greater investments in people and help spur people driven land reform.

Stephan Drani, the Cultural Leader of the Madi, an ethnic group from Uganda, stressed that customary land tenure systems must be considered in tandem when policy makers and practitioners talk about land governance. He stated that his customary land rights maintain that if land is to be sold, the decision is for the family as a whole, including the mother of the family, to make and is not solely the decision of the husband. Drani stated that mapping land with families, including women, in a participatory manner would help increase women’s land tenure security. By including women at the beginning of the land tenure process, he said that women could be better positioned in land decision making activities.

Amadou Kanoute, Executive Director of the Pan African Institute for Consumer Citizenship and Development, a civil society organization (CSO), also highlighted the need for greater people driven land reform. Kanoute stressed that the implementation of multi-stakeholder approaches at the national level would play an important role in this regard. “Women alone cannot do it [securing women’s land rights]. Government alone cannot do it. CSOs alone cannot do it; no one alone can do it. You have to make them sit in the same room and come to a consensus approach”, said Kaoute, an approach he said that CSOs can help to bring about. The development of better monitoring and evaluation tools and procedures, and the generation of more data can also help ensure that policies are better implemented on the ground. These approaches would increase women’s agency and give them more opportunities to make progress towards securing land tenure and sustainable livelihoods